« I write in my role as founder and Artistic Director of the Live Arts organization Punctum, (a company and incubator for contemporary performance creation and transmission based in Australia). Punctum is a member of the l’Association des Centres Culturels de Rencontres (ACCR – a worldwide network of classified historic buildings activated by contemporary arts organisations whose headquarters are based in Paris) and is also a member of the IETM – a worldwide network advocating for the value of performing arts through access to international connections, knowledge sharing and exchange (headquarters based in Brussels).

I have had the great privilege of working with Groupe Merci since its first days inhabiting, activating and restoring Pavillon Mazar. I have witnessed and assisted the care, courage and generosity that Groupe Merci has brought to the city of Toulouse over the past 20 years through the company’s preservation of this significant building that now informs the city’s patrimony. I have been an associated artist on many of Groupe Merci’s creations (including La Mastication des Morts and Europeana) and with Groupe Merci at Pavillon Mazar and I have run ateliers and guided the work of young creators as part of the company’s high calibre program of skills and knowledge transmission. It is therefore from the perspective of a creator working internationally, an advocate for the preservation of patrimony through contemporary arts research, and as a mentor for more than 400 emerging artists that I write to emphasise the incomparable value and international significance of Groupe Merci and the life they bring to Toulouse through their presence and preservation of Pavillion Mazar.

The work of Groupe Merci – its open door policy assisting emerging artists and companies through Les Chantiers Nomades, and its program of ateliers is of national and international importance. At Pavillion Mazar there exists a rare combination of professional exactitude, generous celebration of cultural and architectural patrimony and a keen view to the future. As a place of research and creation it is a rare combination of the unique and the welcoming. Groupe Merci has an exemplary relationship with the city through its engendering and support of the next generation of artists, its long association with artists researching new art forms and practices, and with students and graduates from conservatoires in Toulouse.

At the 2014 IETM plenary session in Montpellier, Groupe Merci’s presence at Pavillion Mazar was heralded as a rare instance in France of a company and place provoking rich and informed cultural dialogue whilst testing its validity and relevance through contemporary performing arts practice. In practice and as a place of knowledge transmission Groupe Merci and Pavillion Mazar have considerable authority and have earned worldwide respect. As a coalition of practice and place, they have had an irreplaceable impact on my own career as an Artistic Director. My approach to research, residencies and creation is in large part thanks to their influence. That I am now working in the sphere of international networks and collaborations is due to the origin of this practice in their visionary program.

In your capacity as leaders of the city paving the way for future citizens and visitors whilst preserving the city’s cultural and architectural patrimony, I urge you to undertake everything within your role to sustain and develop the work of Groupe Merci and its home of influence – Pavillion Mazar. » 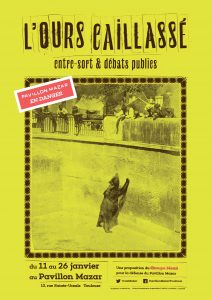